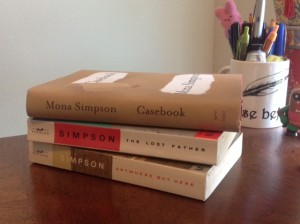 Chuck and I visited Portland recently and while browsing at Powell’s I saw Casebook, a new book by Mona Simpson. I try not to buy too many books in hardback; I can’t afford it, plus I don’t have the space for them. But there are some authors I must have immediately, and Mona Simpson is one of them.

Certain books, if you read them at the right time, make a tremendous impression. They not only strike a chord and reflect some inchoate feeling or experience you’ve never been able to articulate, but evoke something deeper and teach you about yourself. These books are works of genius, and I include in this category Mona Simpson’s Anywhere But Here and The Lost Father; if you have not discovered them, they’re worth seeking out. I’ll just leave this quote from The Lost Father to give you an idea of what you’d be reading if you pick up her books:

I might have been losing my mind in that car or I might have been learning the things I needed to know for my life, I couldn’t tell which, but hurtling in the straight line of that still landscape I feared as I always feared given wisdoms, could I keep them and hold them, or would they just streak the dark with their penmanship and fade before the word was through, like fireflies on a Wisconsin dusk, flickering, never captured, writing the story of the world but not on anything so stable as paper or stone but in time so that it was legible only through the decipherment of memory, which was always changing.

So there you go. She is a master; any new work of hers is cause for celebration.

Simpson’s writing is clear and precise, with a sense of suspense that draws you along a strong taut thread. Her novels are rooted in character, vivid with details of place. And often her prose takes flight, like a rush of adrenaline that sets your heart beating. Her books hold up love and loss like family heirlooms and let the reader gaze at them in awe. Casebook is no different; it is a glittering puzzle, complex and compelling.

Here, Simpson revisits her theme of children troubled and betrayed by the parental figures in their lives. The book tells the story of a woman, a mother and mathematician, through the eyes of her son, Miles Adler-Hart. After a divorce that Miles, try as he might, cannot parse or deconstruct, a man named Eli Lee comes into his mother’s life and generates joy and confusion for the whole family. Casebook is Miles’ reconstruction of that time.

I don’t generally like books narrated from a child’s perspective; it’s rarely done successfully and I find it artificial and coy. But Simpson tells a young boy’s story as narrated by his older self, in recollection, which allows her to present adult insights without coming off as stilted. Miles tells his sisters to “chillax” and resents having to toast his own bagel, but also has the sophistication to muse, “I wondered what correlation pain had with reality. All this had already been true a week ago, but she didn’t know and she had still been happy.” He is nosy, insightful, spoiled, and possessive of his mother, and he researches and documents her life with the assistance of his best friend, Hector, who maintains an envious crush on the Mims, as Miles calls her, and the home she creates.

There is an explicit connection to the stories of Sherlock Holmes; the mother’s name is actually Irene Adler, Holmes’s great woman character, and the two boys at the heart of the story provide a Holmesian pair, with the narrator playing the part of Watson and the brilliant Hector a stand-in for Sherlock.

Unfortunately, I did not think the ending was as perfect as the rest of the book; there’s a sense of distance when Miles recounts the final events. The ending allows Miles to stand back from his mother and try to accomplish what he’s been struggling to do all along: see her as a whole person. This act marries faithfully with one of the book’s great strengths, the powerful connection of love and respect Miles feels for his mother. However, I found the ending disappointing because it abandons the other great strength of the novel: the searing and hilarious, intrusive and quirky voice of Miles as direct witness. He is our Watson; he recounts and rescues the story, and gives us insight into the strange mystery of the responsibilities we have to the ones we love.