This list is not exactly vacation book recommendations; it’s the books I read during my vacation the second week of June. I visited the East coast and spent a week with my mother in New Hampshire, where I did a lot of reading. Here are the books that I read, in order: 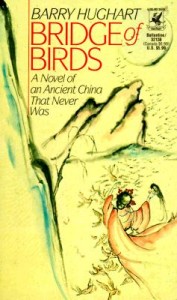 I started this book on the red-eye to Philadelphia. It was a recommendation from one of the book buyers at Powell’s, billed as a different kind of fantasy novel, which takes place in an alternate-history China. The story had a strong fairy-tale vibe, heavy on supernatural bad guys, puzzles, and quests that required three actions and a secret key given by a troll maiden under a bridge. So to speak. I found this book interesting but did not love it, in part because of some casual violence against the women characters. An ambitious change of pace from standard high fantasy but ultimately it didn’t really speak to me. 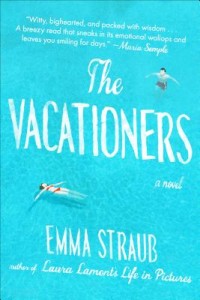 Bought this one the day it came out. Seemed ideal for a vacation, as I imagine the publisher intended by releasing it in early June. I didn’t even realize Emma Straub was related to the great Peter Straub until her second book, and maybe that was a good thing because I was able to come to her work with less bias than I might have otherwise. Of course I just ruined it for you if you didn’t already know… Straub is absolutely the real deal, a terrific writer with a smart eye and an assured style. I loved her book of short stories, Other People We Married. I was less enthusiastic about her next two, longer works of fiction. Laura Lamont’s Life in Pictures and The Vacationers are both entertaining, sharply observed and cleanly written, but to me they lack the sense of urgency that I felt in the first stories. (There was one about a young Brooklyn mother who hires a pet psychic to help her find her missing cat, and another in which a recently transplanted faculty wife shoots BB guns with her basement-living next-door neighbor that were taut, weird, and moving.) Laura Lamont felt strangely detached, as if the story was being observed from a distance. I knew I was going to be disappointed when the novel skimmed over the break-up of the protagonist’s first marriage by a kind of “three years later…” type of thing. I mean, the details of the break-up are what we’re there for, right?

The Vacationers features characters from the short stories and Straub creates them with telling details and subtlety—maybe a little too much subtlety. The characters seemed self-involved and self-congratulatory, again observed from a distance. It’s a lovely book about white people staying in a nice house with a pool. There just didn’t seem to be that much at stake. This sounds condescending and I have absolutely no right to make this suggestion, but if I were one of Emma Straub’s readers and advisers I would tell her to get a little dirtier when she writes. Her poise seems to be working against her storytelling. 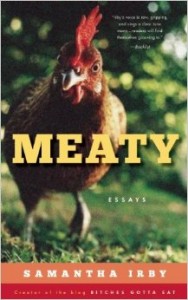 When my friend from graduate school, the poet and teacher Yvonne Murphy, disagreed with me about something she used to say, “I am your opposite.” (You can buy Yvonne Murphy’s excellent book of poetry Aviaries here, and I recommend that you do.) Well, Emma Straub, meet your opposite: Samantha Irby. This is a writer whose voice is skillful and accomplished, but who makes urgency her centerpiece. Irby’s voice is not for everyone: she doesn’t pull punches, and she gives the gory details at every opportunity—but I find her to be pure oxygen in a polluted world. I live for her blog posts at bitchesgottaeat, and I’m not exaggerating when I say I idolize her courage and her raging, lightning-fast sense of humor. Her intelligence is like a shining light, exposing truth wherever she aims it, and behind that intelligence is a searching compassion that makes her truth burn even brighter. She’s funny, angry, and brilliant in the best possible way. This collection of essays made me laugh out loud over and over. I can’t recommend it highly enough. Buy this book immediately.

This is what I’m talking about when I call something a “beach read.” I enjoy Maeve Binchy’s novels every now and then, though this later work about a heart-care clinic is not one of my favorites. (The Glass Lake might be my number one.) Her books are lively and entertaining social dramas, and ultimately soothing. In a Binchy novel, all problems can be solved by a lick of fresh paint and some new curtains. The only thing I find frustrating about her work is that the bad guys never really seem to get theirs—mostly because everyone in the Binchy universe is redeemable, no matter how badly you may have let other people down.

I like genre fiction, and mystery novels are one of my favorite genres. If you have only read Harris’s Sookie Stackhouse books, you should check out her Aurora Teagarden series, which is always entertaining. I’ve read these before but they were fun and relaxing. I’ve been meaning to do a post exclusively on Charlaine Harris, but right now I’m going to just say she’s always a good bet. 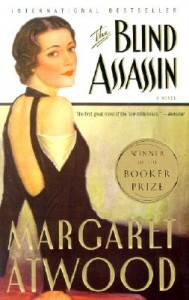 Damn it, I’m going to do that essay thing (thesis/antithesis/synthesis) and say that Margaret Atwood is the perfect blend of Straub’s cool storytelling smoothness and Irby’s two-fisted humanity. This was a re-read for me, but what is a vacation for if not a chance to kick back and relax with your favorite things? This book is a symphony of suspense, pacing, and banked emotion. You’ll probably guess the dark secret long before the protagonist does, but that’s one of the book’s interesting complications: how do you feel about the narrator’s culpability, and her strange and beautiful attempt to make up for her mistakes? I recommended this book to my mother, forgetting just how dark Atwood’s work really is. I hoped she liked it, because I think this is a masterpiece and Margaret Atwood is a genius.

This book is a police procedural, the first of a series. My mom gave it to me to read on the plane going home and it held my attention for five hours. It takes place in Brattleboro, VT, which seemed an appropriate coda to my East coast interlude. The protagonist is a middle-aged white dude who solves a decently twisty series of murders. Extra points for an effective, claustrophobic description of driving on the highway in a snowstorm. There’s a lot of emphasis on research in this book: clearly the author talked to some experts, and he included a lot of what he learned. There was some light slut-shaming of the main victim that turned me off a bit, and a confusingly supervillian-like bad guy. The ending made a statement about guns and violence and men, or something. I like mysteries and this one was interesting and held my attention, but the key to hooking me into a series is to get me invested in the detective main character and I found Joe Gunther didn’t really stand out. There’s a lot of other books in this series, though, so I’m going to give Mayor another try.

So there you go. I’m looking for more summer reading suggestions, so if you have a good one, Tweet it at me. And thanks.